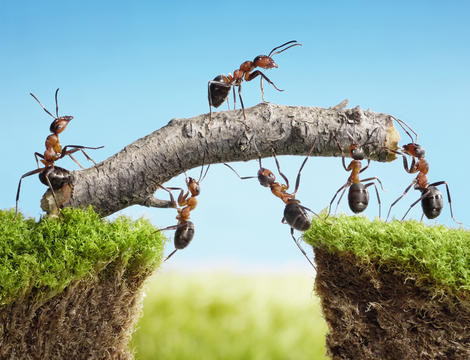 Ants are fascinating creatures that have been around for thousands of years. Although unsightly and worrying when you detect hundreds (or thousands!) of them running along door and window frames in and around your home, unlike other insects, they do not carry disease and, only a few rare species deliver a nasty bite or sting – and these are rare in the UK.

Ants and their habits

Ants are thought to be related to the wasp, having evolved from it some 130 million years ago. There are many species of ants to be found across the world but the majority of ants like one thing: warmth.

In the cold of winter, all ants are deep underground, looking for warmth and all snuggling together for heat. Any ant that pops his head above the parapet in winter is unlikely to survive long in the cold and rain.

But, if we think the humble ant is to be sniffed at, think again. Capable of carrying 100 times their own weight, they are industrious workers who can move with speed, the equivalent to a greyhound in many cases.

Around April time, as the sun starts to warm the ground, ants deep in the earth starts to wake and hence, they become more noticeable on the surface. Depending on the heat of summer, ants can be visible right though until September or October. The ants you see are the worker ants, all sent out by the Queen Ant to look for food for her and her eggs.

And it may be the location of this Queen Ant that can be the root cause of the ant infestation in or around your home;

So if they are not a problem, why get rid of them?

Ants are not dangerous, especially in the UK, but more than anything they are a nuisance. Ants are determined and intelligent creatures; which can become incredibly irritating in the way that “one” can turn in to hundreds in a blink of an eye. And you don’t want to entertain on your patio on a summer’s evening, to find a colony of ants parading across your table…

The only real solution is to find the nest or colony and eradicate it. There are many gels and powders available to buy in shops but if you have a large colony you may only ever eradicate part of it, or you will need a huge amount for it to be effective.

Professional pest controllers, such as Devon Pest Control, can use a wider variety and stronger insecticides to rid you of your ant nest problem. However, they are safe to use around the home, especially when applied correctly to the problem.

Why not get rid of your irritating ant ‘problem’ and call Devon Pest Control today?