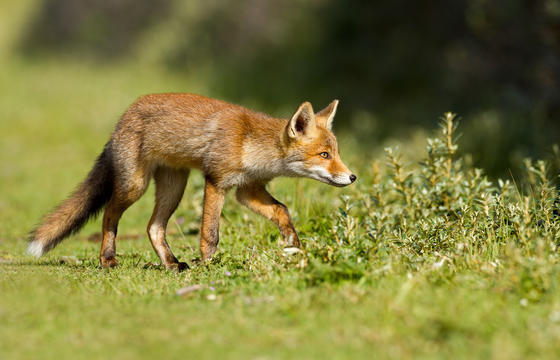 Foxes are common across the UK and have become even more common in urban areas during the 20th century. So much so, that many people are now realising that on occasions, they have pest control problem that involves the neighbourhood foxes.

The natural habitat and life of a fox

Foxes lives in dens and can be spotted by the debris of food and faeces around the entrance, as well as an unpleasant musty odour. The begin breeding in January – characterised by the eerie sound of the vixen call – with the young appearing in March. They have small litters of around 4 to 5 cubs. They remain in the safety of the den until around May time, when they emerge in to warmth of the spring sunshine.

Foxes are useful to humans in that they are natural predators of some other animals that can cause us problems in uncontrolled numbers such as rabbits, birds, small mammal as well as insects, worms, fruit etc. But they are a scavenging animal, rooting through bins and general rubbish can be a nuisance in an urban setting.

It seems from studies that people either like foxes or are indifferent to them. In other words, the fox does not have a love/hate relationship with humans and they rarely interact. They pose no dangers to humans in terms of carrying diseases and neither do they seek to bother cats, but there are instances where some animals kept outside can be an easy meal – the domestic rabbit, for example, or hens, the keeping of which is now common in gardens, towns and cities.

Their shedding of their winter coat in spring can make them appear mange ridden, but this is rarely the case. They can carry the canine mite that causes mange but all-in-all, foxes pose very little threat to humans.

But, what are the problems?

Urban and rural foxes for that matter, can be a nuisance…

Some problems, such as the vixen’s mating call, is temporary and short term but there are solutions to some other problems that they can cause;

However, blocking dens is something that should be left to professional pest controllers such as Devon Pest Control. Before blocking it, the den will need to be monitored to ensure that all foxes and cubs have vacated the den. Once the den is sealed, it can take persistence and patience to ensure that the foxes do not return.

Regardless of what you read, foxes are not classed as vermin and killing them, or relocating urban foxes to the wild can be an illegal act, unless done so by a qualified and professional pest controller. Why not discuss your fox problem with us?